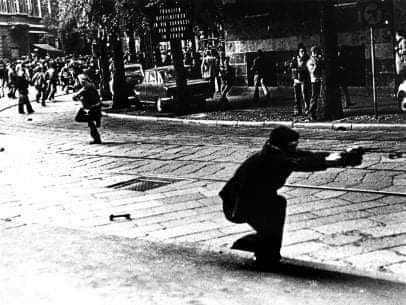 A message of solidarity from the imprisoned member of Anarchist Action Thanos Xatziagkelou to the unrepentant anarchist Claudio Lavazza, on the occasion of the appeal for the lifting of his 25-year imprisonment which is being considered on 17 May.

Now a prisoner in the most dystopian hall of tyranny and a set of words on a piece of paper would be useless to describe in a descriptive way the ideal of revolutionary intransigence. How can one fit into a moment, a life of insubordination, totally given over to the unyielding struggle, without omitting every important detail.

To this day, there have been few who have tried wholeheartedly to bridge the gap between life and survival. Those who, against tyranny’s rabid dogma of the “end of history”, laid down their lives in the wholehearted hostilities of the revolutionary base. They enlisted sternly and unyieldingly on the fractious front of subversion, bled while comrades were perishing in battle, but imprisoned in the face of the danger of repentance and legitimacy, they chose ironclad pride.

Comrade Claudio Lavazza belonged to the same mixture of figures of struggle that divided them by a very important “particularity”: injustice and exploitation, social decay and tyranny were not just statements but issues that concerned them individually and collectively. They did not adapt ideology and politics to their lives; they devoted the absoluteness of their existence to vital and militant resistances. Enlisted in the armed ranks of the Italian Autonomy, he chose very early on the path of illegal freedom in the face of repression and political degeneration from statements of repentance.

He never compromised with resignation, serving in practice the historicity of radical resistances. By choosing the front line in armed conflicts, in expropriations, in the armed movement of solidarity and liberation of imprisoned militants, he himself was taken prisoner after an armed confrontation during the expropriation of the Santander bank in Cordoba on 18 December 1996. For more than 25 years Comrade Claudio has been a model of the unrelenting battle of insubordination without surrender or submission.

The heaviest weapon in the hands of the oppressed is the rebellious memory, the memory of fire. The irrevocable paths carved by revolutionaries from all corners of the earth, fighting for subversion and against counter-revolution, are the bullets in the magazine of the fighting proletarian base. Comrade Claudio stood faithfully and devotedly present to the challenges and historic tasks of the revolutionary war. Modest and humble, an avowed enemy of the ruling class and “unequivocally unrepentant” at the same time that the supporters of legitimacy declared a unilateral truce, leading the anarchist movement towards political-military disarmament and surrender.

you once wondered if we could be like everyone else. Compromised in apathy and resignation, serving every day like slaves in some boss’s cage until we too grab the whip. Sinking into the quagmire of the couch watching alienation and exploitation change scenes and colors on the screen. And every Saturday night we go out, honorably, to entertain our boredom and decadence. No, Claudio. We could be nothing less than the transitional stage towards social liberation and proletarian counter-power. Until the barbed wire sky is cleared of steel stains, we will serve with the same dedication to the intolerance of human dignity. For a thousand lives, as if it were the first day.

As long as the dictatorship of confinement reigns, there will always be, proud voices crying out that only conflict opens passages.