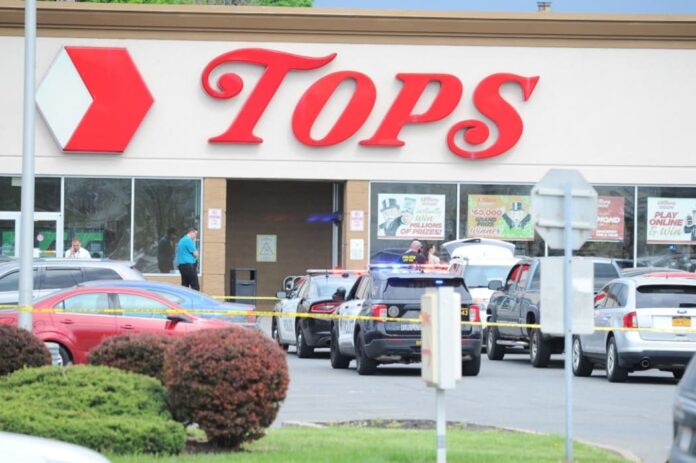 On Saturday, May 14th, 18-year-old white supremacist Payton S. Gendron drove over 200 miles to a black neighborhood in east Buffalo and gunned down ten black people in cold blood. When the cops showed up, Gendron aimed the gun at himself; but, as any friend would, the cops talked him into surrender.

Gendron had written a manifesto of his ideology and intentions. Apparently, the Buffalo shooting spree had been in the works for years. He was a believer in “replacement theory,” the white supremacist fear of being replaced by black and brown people in the U.S. The incident echoes the execution of nine black people at Bible study at Emanuel African Methodist Episcopal Church in Charleston, South Carolina by white supremacist Dylann Roof on June 17th, 2015, who was just three years older than Gendron and who also wrote a hateful manifesto. Patrick Crusius, the fascist scumbag who shot up a Walmart in El Paso, Texas back in 2019, killing eight Mexican people in response to “the Hispanic invasion of Texas,” also subscribed to replacement theory.

The carnage was livestreamed via Twitch.

This is where, and when, we are. The US is home to both willing hosts and eager audiences for white supremacist violence. White supremacy is attracting younger and younger fans— and engaging with them twenty-four/seven. What’s more, the police response lays bare the hollowness of an old refrain: Heat of the moment. We have been expected to believe, over and over again, that a black person’s murder is an accident— a tragedy caused not by malice but by bad decisions made in the heat of the moment. That Gendron lives while black people who bought loose cigarettes, reached for a cellphone, or simply entered their homes do not is a testament to both the State’s ruthlessness and its duplicity.

While increasingly visible, the codependency— and frequent collaboration— between the State, white-supremacist militias, and lone white-supremacist murderers is nothing new. One of many recent examples from which one could draw is Portland, Oregon on the weekend of June 3rd, 2017, when the Department of Homeland Security instructed members of the alt-right militia American Freedom Keepers to assist in arresting counterprotesters at an alt-right rally. There is also a tremendous amount of overlap in membership between police, military, and “street fascists” such as Patriot Front, Proud Boys, American Freedom Keepers, Atomwaffen, etc.— just as there is a well-documented history of active Klansmen within various police departments.

The US Empire is foaming at the mouth, besieged on all sides by the consequences of its own glut.

As it foams, it miscalculates in the way that all empires eventually miscalculate: It pushes its luck. It overplays its hand. It demands too much.

The only way to end these white supremacist murders once and for all is through a militant revolutionary movement.

We will prepare to defend ourselves and our communities.

We will learn from the struggles of those who came before us.

We will fight with all that we have

For as long as it takes
By any means necessary

Until the war against white supremacy