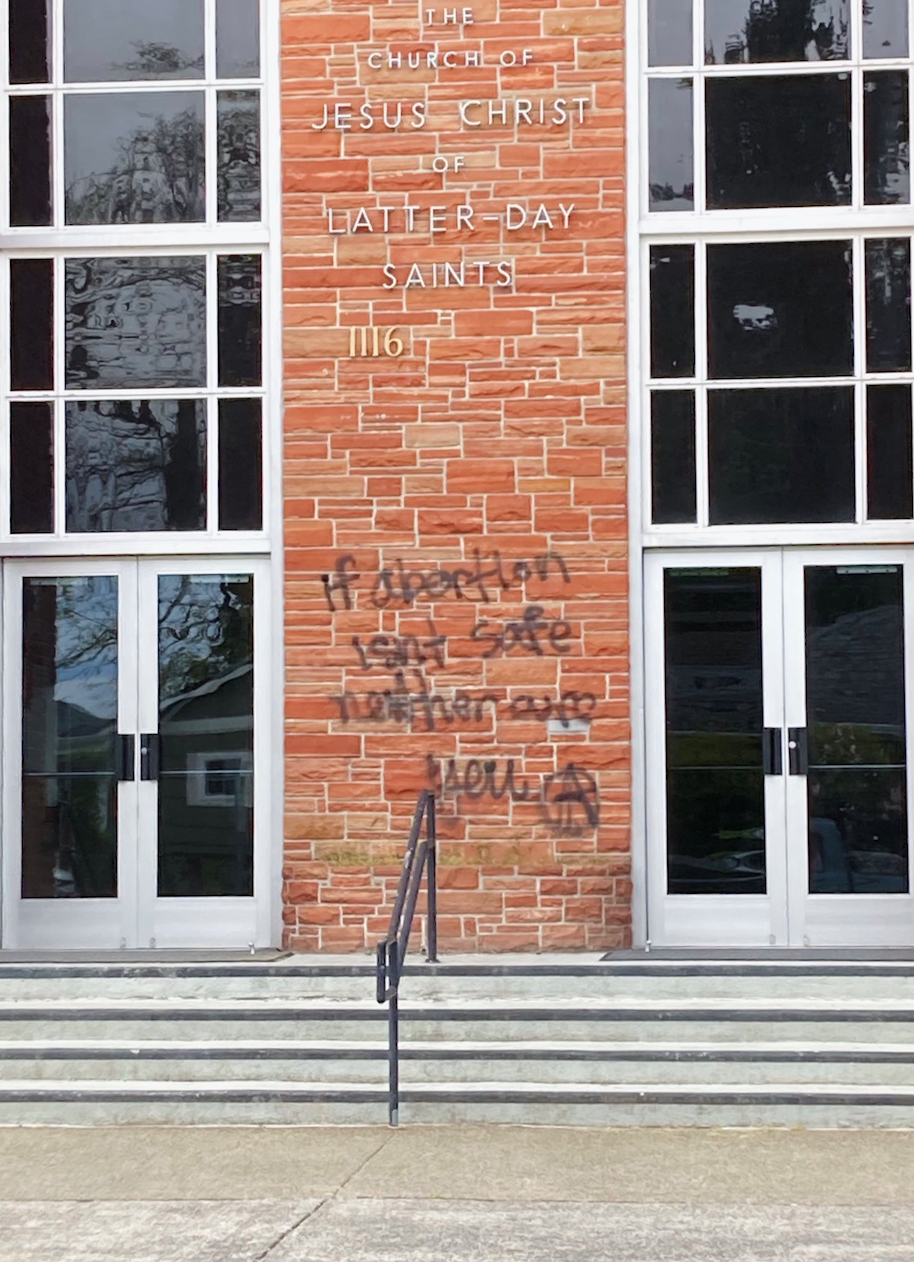 Last night we vandalized four anti-abortion churches in Olympia. All of these churches have ties to anti-abortion “crisis pregnancy centers,” religious fake clinics that manipulate mostly poor people into having & keeping children they don’t want or aren’t ready for and marrying whomever impregnated them whether or not that relationship is healthy or safe. Crisis pregnancy centers are exploitative and serve the aims of upholding the patriarchal family, a primary site of violence against women, queers, and children.

A Mormon church, Calvary church, Harbor Church, and St. Michael’s Catholic church all received facelifts in the early hours of Sunday morning. We dumped red paint over the entryways and left messages of “If abortions aren’t safe then neither are you,” “Abort the church,” and “God loves abortion.”

Even in the likelihood that abortion remains legal in western Washington after roe v. wade is overturned, there are still local enemies who are doing everything in their power to make it as difficult and inaccessible as possible. These churches are terrified of people exercising bodily autonomy – whether aborting unwanted pregnancies or taking gender-affirming hormones/surgery or fucking whomever we want – because they need the rigid hierarchy of the family as the basic unit of control. It’s not even conspiratorial to say the Mormon church, Catholic church, and all others that punish abortion and reward marriage are patriarchal sex abuse cults. From the beginning, the church has sought to control and destroy every impulse toward pleasure and self-determination.

While a little graffiti may be a small gesture in the war against patriarchal religious control, we wish to highlight that it’s easy and fun to attack. Our enemies are vulnerable and easy to find. In acting, we learn to act; in waiting, we only learn to wait. The secret is to really begin. There is an anti-abortion fake clinic in Olympia at 135 Lilly Road NE called “Options Pregnancy Clinic.” Its website lists its financial backers including Guild Mortgage, Molina Healthcare, Howard’s Cleaners, Shocking Difference Electrical Contractor, Interstate Batteries, Tumwater Automotive, Timberland Bank, Nichol’s Trucking, Olympia Federal Savings Bank, and Kiley Juergens Wealth Management. Each of these businesses should be considered responsible for the violence of forced birth.

We echo the words of some crazy bitches from over a decade ago when we say that we are not asking for the right to choose, we are taking into our own hands the ability to abort a pregnancy. We are not asking for advertisements or media that pander to trans people, we’re wresting the tools to change our bodies out of the control of doctors. We are not appealing to state power for an end to patriarchal violence, but threatening: “If abortions aren’t safe, then neither are you.”