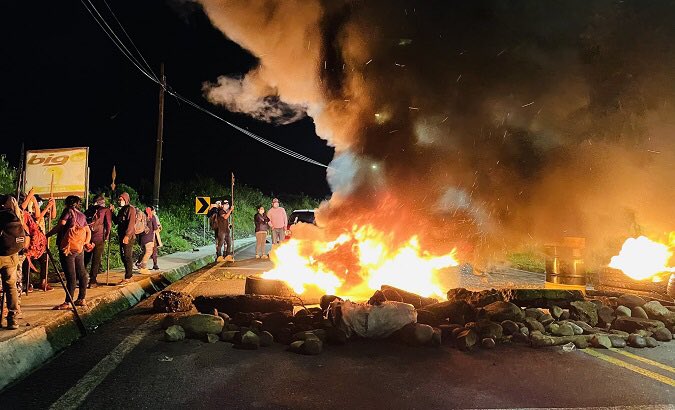 From the early hours of Monday, the Confederation of Indigenous Nationalities of Ecuador (CONAIE) began a national strike against the right-wing regime of Guillermo Lasso by blocking highways in provinces such as Pastaza, Napo, and Guayas.

The protesters were blocking roads with burning tires, stones, trees and mounds of earth in at least 10 of the country’s 24 provinces, including Pichincha, home to the capital Quito.

Indigenous communities and farmers have been requested the reduction of fuel prices, the renegotiation of debts, the reduction of interest rates, fair prices for agricultural producers, job creation, and respect for labor rights.

In response to the pro-corporate policies applied by the Ecuadorian government, social movements are also protesting against the expansion of the territories assigned to the extraction of minerals, oil, and wood. These activities are generating severe social and environmental impacts, especially in fragile ecosystems such as those located in the Amazon and in the Andean highlights.

Lasso in October froze prices for the most-used gasoline and for diesel at higher rates than had been in place before he took office.

That sparked protests that ended when the government opened talks with Indigenous leaders and other organisations.

The talks have continued since then, but Indigenous leaders say the government is not listening to their concerns and therefore they have decided to restart demonstrations.

On October 3, 2019, CONAIE also led a national protest against the administration of Lenin Moreno (2017-2021) that paralyzed the country for 10 days. Convened in rejection of fuel prices, this national strike was harshly repressed by the Army and the Police, which caused the death of over a dozen people and some 1,500 wounded citizens.

On Monday, the right–wing Lasso government in Ecuador used the police and Army to arrest Leonidas Iza Salazar, the national leader of CONAIE, the indigenous peasant organisation which launched an all-out national stoppage against Lasso’s austerity policies.