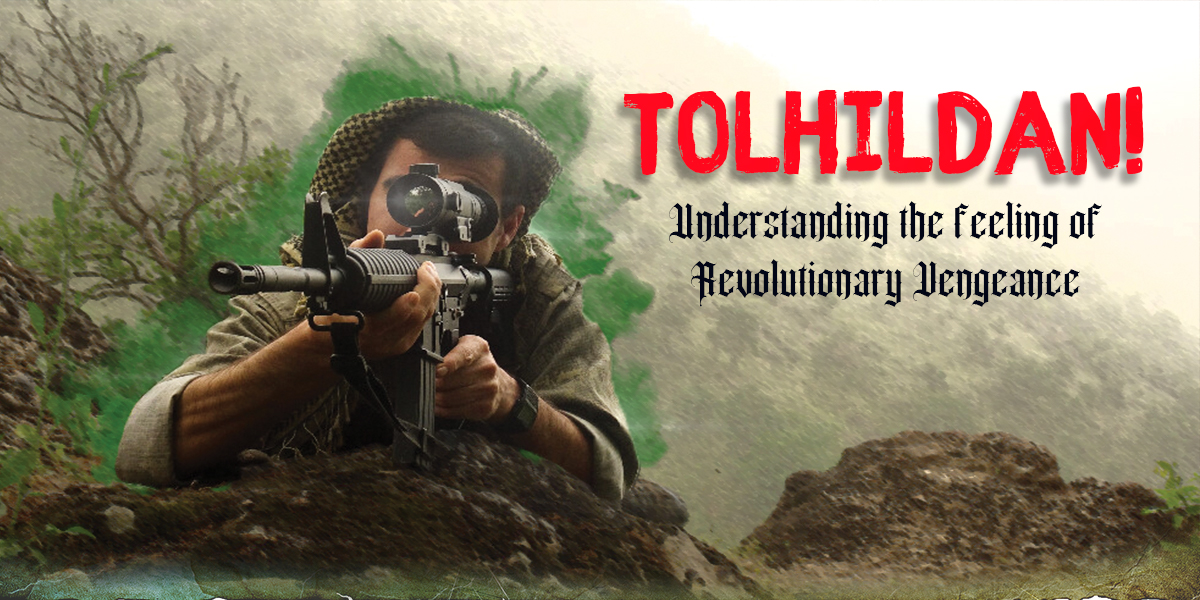 “Tolhildan” in Kurdish means “revenge” in its literal translation. However, within the revolutionary movement of Kurdistan the meaning of the word carries a more ideological meaning behind it – just like so many other words, like “heval” for example, which can be translated as “friend/comrade” but has a deeper ideological weight of companionship than the well-known pronoun of treatment within the left.

Around the globe and throughout history, there have been several revolutionary processes that have changed the paradigm and the way of social organization. These revolutions brought progress to the human being, but as time went by and the capitalist mentality became a state mentality, patriarchal and hierarchical, it ended up creating the power and state structure that we know since then. We can understand this process from the Agricultural Revolution, which began the Neolithic period of human history, to the Soviet Revolution in the 20th century and the changes it brought with it.

This implies that, throughout history, the human being has always been searching for freedom, or at least the closest form of it, in order to be able to live and socialize. The peoples who knew the natural way of relating, the so-called “primitive socialism” among Marxists, never bowed down to this form of hierarchical and state organization, and for this reason were decimated or assimilated among the imperial powers that gave birth to civilization. Such peoples were labeled as barbarians or primitive by civilization, as was the case with the Roman Empire and its territorial conquests around the globe, or the imperialist colonizing process of the European nations in the 19th century.

Revolutionary Vengeance is the act of consciously taking revenge for the exploitations to which one has been subjected or recognizes that capitalist modernity and its oppressive system of nation-states imposes on different peoples, cultures, ethnicities, and even human nature itself.

There is a phrase by Simone Beauvoir in which she says: “The oppressor would not be so strong if he did not have accomplices among the oppressed,” which reminds me of Paulo Freire’s phrase in which he says: “When education is not liberating, the dream of the oppressed is to become the oppressor.” What does this have to do with Tolhildan? Everything.

As this system has imposed itself around the world and become the way in which we live together, how we relate, understand and see ourselves in society, we have subconsciously accepted as human beings to live in a social dystopia that seems to be straight out of a science fiction novel, where people have no idea that they live under a projection of their lives while they are being sucked little by little by machines – which we can analyze as the representation of the system of capitalist modernity. This reality is artistically exposed in the Qatsi films:

These films critical of civilization are essential for a visualization of what the human being has become over the last 5 thousand years and where we are heading. Human beings have been removed from their nature and taught to live in a way that ignores their communal and democratic origins, being enslaved by a system that exploits, oppresses, kills, and destroys. To give coherence to Tolhildan’s sentiment, we must start by understanding this whole process through which the human being has passed, and how we have reached this point where oppression occurs within our own personalities, where we have the mentality of the enemy within us, living according to their principles, methods and ways of relating in society.

That is why, when revolutionaries say that revolutions are built on the feeling of love, they are right. But not the love that this system sells all the time and distances us from its real meaning? It is love for freedom, love for the people, for sincere relationships, for a life where we all have the conditions to live with dignity, love for the utopias that the system tries to convince us are impossible. But at the same time, to be able to love in this way and to understand this feeling in its magnitude, it is necessary to hate. To hate the system that put us in this situation; to hate the mentality of patriarchy, which is the reason for the first colonization and oppression in human history; to hate the inhuman and immoral practices of those who destroy life, nature, history, and humanity itself, looking for profit, power, and control. This dialectic between love and hate is necessary to develop the search for freedom, to develop the construction of a revolutionary personality that refuses to live within the principles imposed by the capitalist modernity.

To build a free and revolutionary mentality it is necessary to kill the oppressive and capitalist personality under which we have been educated within the system of capitalist modernity, for this it is necessary to feel hatred for this mentality, hatred for what its practice becomes and reproduces around the world. But at the same time, to love freedom, equity, nature, it is about finding the balance between these opposites at their centers. Revolutionary revenge can take place through direct action against the enemy, against his soldiers, his generals, his places of exploitation, his companies and multinational corporations, etc. But the greatest possible act of revolutionary revenge is to build the militant personality, to dedicate oneself to human liberation from this system and to build democratic modernity.