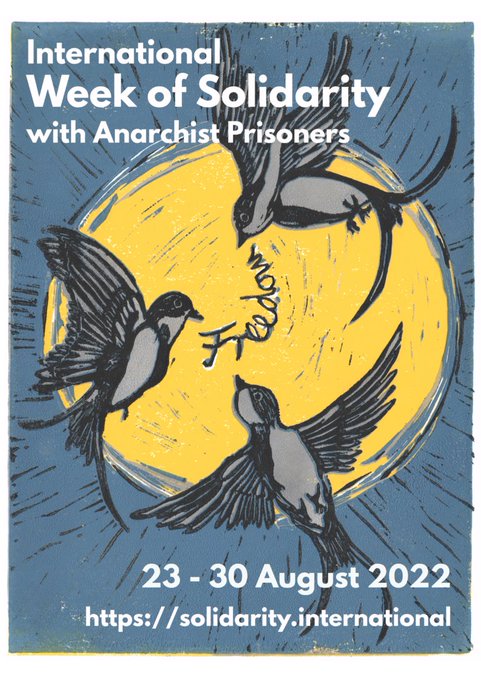 “Does this rising generation know that those who inaugurated the 8 hour day were put to death at the command of Capital?”
Lucy Parsons, The Haymarket Martyrs, November 1926

“Although we are not reformists, the struggle to obtain improvements in one’s immediate situation (wages, housing, health, education, occupations etc) sees the anarchists present, but they do not see these struggles as ends in themselves. They push the exploited towards this form of struggle so that they can develop the elements of self-organisation and refusal of the delegate which are indispensable in order to develop direct action at all other levels.”
Alfredo M. Bonanno, What are Anarchists?

Despite being in prison, news occasionally reaches me of the many repressive operations and terrible circumstances that our comrades are confronting. That’s why I am in agreement with the proposal once again put forward by the Anarchist Black Cross for a week of solidarity at the end of August. This date is chosen to mark the State murder of anarchists Sacco and Vanzetti. We cannot give in to resignation or become complacent in these times. It is more important than ever to explain and make accessible the anarchist analysis and to put it into practice immediately.

Anarchism is internationalism, self-management, mutual aid, solidarity, and direct action: incisive, voracious and alive. That’s why our spaces are raided and evicted, our publications seized, our communities hunted, beaten, imprisoned and killed around the world.

During my interrogations, the Counter-Terror cops at one point focused on the International Week of Solidarity with anarchist prisoners, accusing this event of supporting terrorism, glorifying terrorism. That’s because part of their strategy is to try to illegalise the Anarchist Black Cross. Their aim is to destroy all solidarity and counter-information structures which spread information about and provide material support for the legal cases of anarchist comrades who are locked up.

Fast forward to June 11th and I received an unwelcome visit from a cop of the South-West Counter-Terror Unit attached to the National Security Division, accompanied by a probation officer of the same. They informed me that despite being found “Not Guilty” of terrorism charges, I would be released under counter-terror restrictions and monitoring when I am due for conditional liberty in December. These restrictions include demands more far-reaching and draconian than the “Serious Organised Crime Prevention Order” that was defeated in Bristol Crown Court on May 6th. These restrictions are explicitly political and aim to prevent me from attending meetings, going on demonstrations and having contact with my comrades, close ones and the counter-culture. All in the name of “Anti-Extremism”. The regime demands that I am locked up in a secure hostel – a micro open prison which is in a city I have no links with. Not once did these servants mention the reason I am incarcerated because at this point it simply does not matter, as this is a repressive move against the anarchist ideas and nothing more. It is obvious that having failed to obtain the verdict they desired in my trial, having failed to impose the SOCPO, they now try to re-state their case through a manipulation of my licence restrictions. I am to be punished for my anarchist perspectives and the “fact” of their allegations. Their real aim is to return me back to prison as soon as they can under any pretext and open up the anarchist movement to their “anti-extremist, anti-terror” programs. For those arrested in the future on demonstrations or during direct action, this classifcation of “left-wing extremism” can therefore be applied even easier. We live in the times that George Orwell warned us of. The answer to this must come from the revolutionary movement itself, not only in terms of a rejection of this repressive strategy, but also in the acceleration of our techniques and organisation. To finish this dreary and legalistic update about my situation, that is the reason why I support the call by the ABC for the International Solidarity Week and not only. I finish with a promise sent on wings of black to all imprisoned anarchists around the world and to those who are free.

I DO NOT FORGET.

You’ll find me there
Where the night cats play
Without masters or slaves
Under starry skies
The sun will rise
“in chaos, there is fertility”
Anais Nin