Popular, Peasant and Indigenous Feminisms to Unite Territories in Resistance 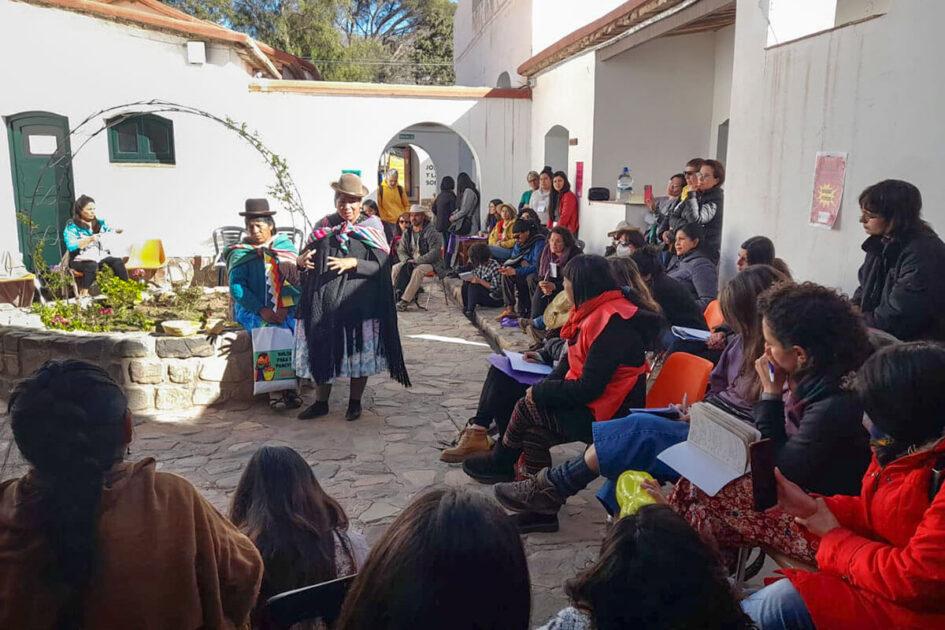 The First International Meeting of Community, Peasant and Popular Feminisms in Abya Yala was held in Tilcara, Jujuy. There, feelings and thoughts of women who defend territories, culture and ancestral knowledge against extractivism were collectivized.

The city of Tilcara, Jujuy, hosted the First International Meeting of Community, Peasant and Popular Feminisms in Abya Yala. More than 2,000 women from the region attended, convened by three powerful feminist thinkers and activists: the Argentine anthropologist Rita Segato, the referent of the Mujeres Creando movement of La Paz, Bolivia, María Galindo, and the Bolivian sociologist Silvia Rivera Qusicanqui.

We went to northern Argentina with our friends, daughters, mothers, grandmothers, ready for a collective embrace. In our case, we traveled from Mendoza to Tilcara in a 22-hour journey. On Friday, August 13, exhausted but happy, we joined the work axes that had been proposed within the framework of the meeting. My companions participated in the axis called “Epistemologies of care”; there was another one on “Feminist aesthetics and bodies”. I participated, together with my two daughters, in the axis called “Peasant and popular feminism”.

This round of debate took place in the cobblestone courtyard of the Terry de Tilcara art museum, located in front of the main square. The women arranged themselves in a large circle to begin the activity. A companion was in charge of the order of the brief exhibitions. After each intervention, comments, reflections and feelings related to what was said were enabled. There were 60 women debating on community, peasant and indigenous feminisms in the current context. The list of speakers included individual and collective subjects, women’s movements and networks.

The round of “Peasant and popular feminism” addressed the role of women in trade unionism, the circumstances of rural youth, the experiences of fisherwomen and peasant women, the situation of feminist media and also how we work today in relation to gender violence. The collective conversation was marked by the indigenous struggle in defense of their own identity and the resistance to socio-environmental conflicts in the different territories.

Each exposition was an expression of an experiential feeling. The stories flowed, at times they stopped, changing the tone and color of the voice. Speaking from the place that involves us, that motivates and challenges us generated mirrors among us: it was very difficult not to empathize with the words of a fellow trade unionist or another activist from an environmental movement.

The stories about the daily struggles of women against mining extractivism, fumigations and the advance of biofuels, with the burden of dispossession and impact on health and daily life that these practices mean, left us with a lump in our throats.

The impotence of recounting the injustice of a “progress” that depredates the ways of life is opposed by the courage of peasant and indigenous women who say enough and organize themselves to denounce how life in the countryside is being altered, to claim that due to pollution and lack of work, families are abandoning rural areas.

There were those who said that one day they could no longer enter the field where they lived, that later their environment was modified by the planting of crops and that finally all that remained was their land under siege by the planting of biofuel crops. There were also testimonies of how the houses are contaminated just by washing the work clothes that the men wear in the fields.

In the round, there were testimonies from the triple border of the Gran Chaco (Argentina, Paraguay and Brazil), which were expressed through networks of peasant and indigenous women who confront extractivism, contamination and violence. They told us about their resistance to mega-mining, highway projects and the advance of monocultures.

Two sisters from the Uru Muratos ethnic group (Bolivia) with their wiphala and handicrafts in their hands and making a great effort to speak to us in Spanish, denounced the contamination of Lake Poopó. This salt water lake is located in the department of Oruro, in western Bolivia. It is the largest lake in the country, after Titicaca. Although it is a Ramsar Site, its flow is threatened by lead, zinc, arsenic and silver mining. The women said that their community used to live from fishing, but that this is no longer possible. They believed that tourism would be an alternative, but it is not yet because it does not ensure their subsistence and food as fishing did. Their handicrafts, made with vegetable fibers that grow in the lake, could be a way out.

Do not consult the university

Every time someone mentioned a university (in Salta, Córdoba or Jujuy), or a researcher, there were comments about the highly negative experiences in the link between science and territory. The academic issue emerged as a topic that needed to be addressed.

In this regard, the account of the women colleagues regarding the science-university alliance at the time of defining an environmental impact report, for example for the approval of a mining project, was forceful. The women who participated in the round summarized it with an example: “Scientists do not consult anyone who lives in the area. They come, get out of a pickup truck and record the first bird they see in a tree… If they asked us, they would know that during the day there are different birds that perch in that tree. They do not contemplate our knowledge when deciding and then they harm us”.

In any case, there were also those who maintained that changes are taking place within the universities.
Grandmothers, our roots

Remembering the teachings of grandmothers was essential for this meeting. Experiences of ancestral organization were brought to mind, such as the councils of elders of the native communities. On this point, the need to overcome the shame of being an indigenous woman was discussed in depth. The pride of being an indigenous woman came from the hand of those grandmothers who resist colonization and claim their identity. Listening to these experiences was mobilizing. With silence and respect, the compañeras expressed their emotion, their tears and their need to say: “Here we are, we exist”. How proud the grandmothers were!

The struggles against projects that put the lives of peasant and indigenous communities at risk were key in the “Peasant and popular feminism” axis.

This first meeting was a great step to collectivize how women who defend territories, culture and ancestral knowledge are thinking about feminism. The practices of resistance and reconstruction that they are weaving were made explicit. The intersection between popular, peasant and indigenous feminisms is key to ending the colonial power that continues to subordinate, plunder and kill.