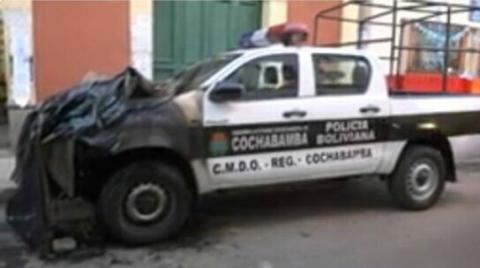 Early in the morning on September 12, at 2:40 am, we placed an incendiary device made up of four half liter plastic bottles filled with gasoline, tied together with tape, that were lit by a fuse made with 5 matches and 3 incense sticks tied together.

We placed this rudimentary device behind one of the front wheels to make sure that the main damage was done to the motor.

Although all of their cars may be set on fire, the selection of a pickup truck belonging to the Special Force Against Violence was not random. There’s no exception, the entire police force is the enemy and we don’t buy their spiel against the fight against gender-based violence. Patriarchy will fall when the last stone of this carceral society crumbles. We abhor its capitalism-with-a gender-perspective. We abhor this spawn of the State forced onto the people in spite of bottomless differences, to satisfy the needs of postcolonial oligarchies. We don’t ask anything from these institutions, we don’t want a single cop in our neighborhoods and communities with the pretext of women’s safety. You, murderous cops, are the (now scorched) phallus patriarchy!

We had lots of fun imagining how you tried to turn off the fire with your little buckets, you lackeys!

This action is for María Fernanda, murdered by the police in the EPI of Chasquipampa in 2021, as well as for all those who were raped and murdered by this enemy institution. We don’t want to reform the police, we want their destruction! We don’t ask anything from the judicial powers, nor from their departments, we want to see them burn! We make an invitation to set their cars on fire with this simple and effective technique. It’s easy and fun.

Our anarchic practices are those of liberation, may they never turn into the mirror of those of the oppressor.

It’s time to leave behind this asphyxiating passivity that invades the self-proclaimed anarcho-feminist and anarchist milieus in this territory. Set fire to what oppresses us, comrades! Now is the moment, and here is the best place to act. Here and now we make a call to all rebels! To the pacifists and cowards of always: Don’t get in the way!

Any day is good for sabotage, but with this gesture we accompany all those that took to the streets in the territory dominated by the Chilean State the day before the attack.
There is only one police across all borders, States everywhere are analogous structures of oppression. There is no border between the oppressed! Let’s attack these disciplinary apparatuses in every territory until our comrades are free.

Free all the anarchist, subversive and Mapuche prisoners kidnapped by the Chilean State!

Solidarity with Mónica Caballero, Francisco Solar, Anna Beniamino, Alfredo Cóspito and Boris, who are undergoing judicial process. May each year the face be met with an infinity of actions!
Free all anarchist prisoners of the world!

May the rage spread, may the fires spread, until the last stone of carceral society crumbles!