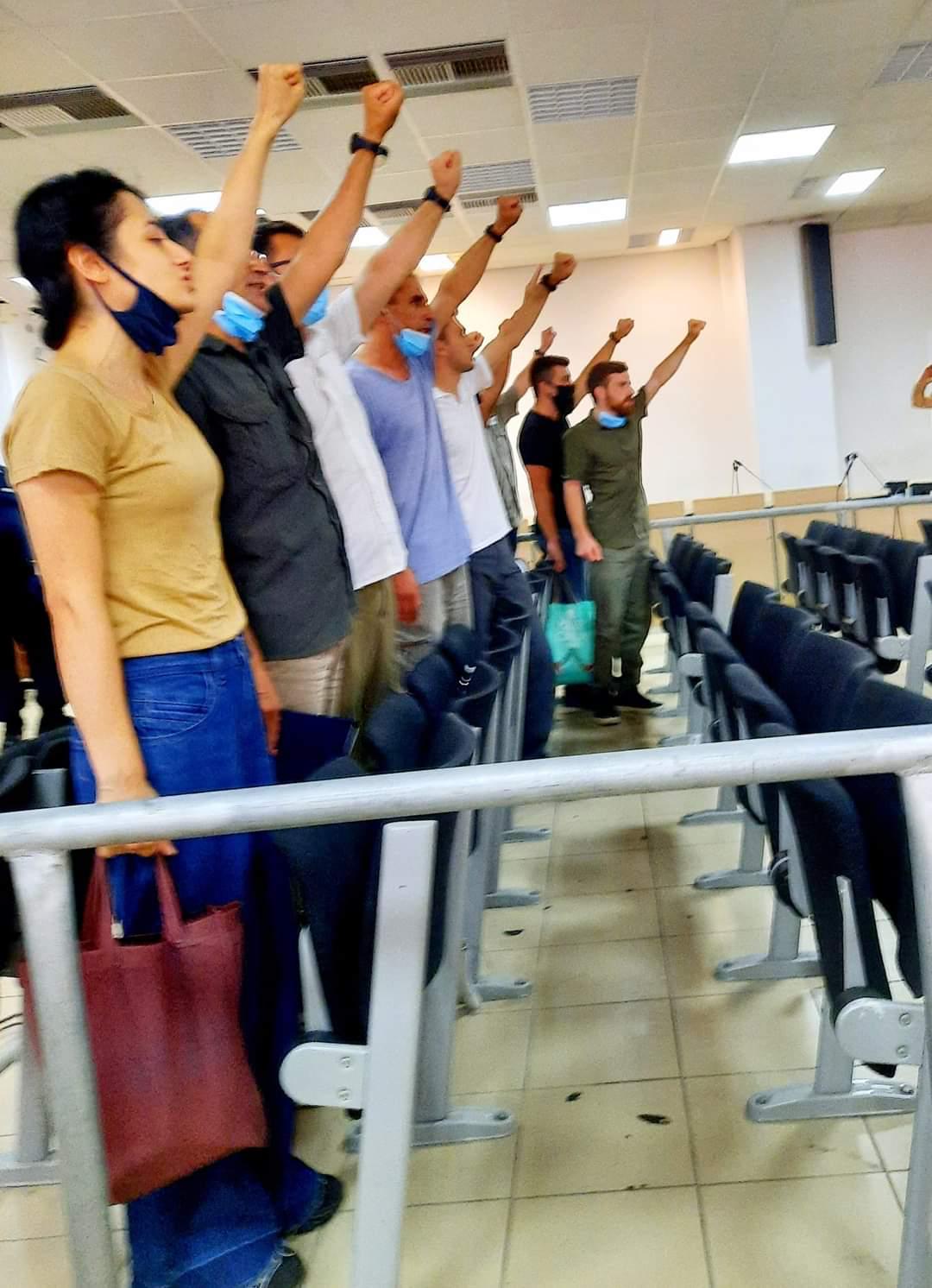 Our people, the people of Greece, and all the oppressed and exploited peoples of the world…

FROM OCTOBER 7, 2022 WE START AN INDEFINITE HUNGER STRIKE!

THE REAL TERRORISTS ARE THE IMPERIALISTS AND THE COLLABORATING FASCIST GOVERNMENTS!

REVOLUTIONARIES CANNOT BE TRIED UNDER THE ANTI-TERRORIST LAWS OF IMPERIALISM!

We are Marxist-Leninist revolutionaries who have applied for political asylum in Greece on different dates because of the fascist terrorism in Turkey and the lack of security of our lives.

However, fascism in Turkey has not left us alone in Greece either. We were constantly monitored by MIT (intelligence service) and our life security was under threat.

Again in 2017, before Turkish President Recep Tayyip Erdogan’s visit to Greece, 9 rebels were arrested in Athens in a conspiracy by the Turkish and Greek police on the grounds that they were “going to assassinate Erdogan”. They were released after 18 months, in court, as there was no evidence for the allegations against them.

However, the attacks against us, the revolutionaries from Turkey, did not stop. As a result of the pressure of the fascist state of Turkey and the US-EU imperialists, on 19 March 2020, the Greek police invaded our associations where we are carrying out legal, democratic activities, again calling it a “terrorist operation”. A total of 25 people from two associations were arrested and 11 of us were arrested.

The political pressure of the Turkish state was officially admitted by Turkish Interior Minister Süleyman Soylu (who is also the head of the drug gangs in Turkey) in a TV broadcast after our arrest.

Our trial took place between 2-19 July 2021 and we were tried under the anti-terrorist laws of imperialism.

Our people, Greek people, and all the oppressed and exploited peoples of the world…

We are not “terrorists” – we are Marxist-Leninist revolutionaries fighting for independence against imperialism, democracy against fascism, socialism against capitalism.

– Sinan Oktay Özen and İsmail Zat have been political refugees in Greece for more than 25 years, participating in the struggle for democracy against Turkish fascism.

– Sinan Çam, 26, has been in Greece for only 2.5 months since he fled Turkey and 1 week since he started living in the house from which he was recruited.

Our struggle is against Turkish fascism and US-EU imperialism

The peoples’ war against imperialism and fascism is legitimate and necessary. And it is legitimate to resort to all means and methods in this war.

Terrorists are the imperialists and their collaborating fascist governments who occupy countries, exploit all the peoples of the world, oppress the peoples and drench the world in blood.

Anti-terrorist laws are laws of the imperialists and fascist governments to hide their terrorism and attack the social liberation struggles of the peoples.

The imperialists and their collaborating fascist governments cannot try revolutionaries with anti-terrorist laws.

The Mitsotakis government is attacking us on behalf of Turkish fascism and the US-EU imperialists. It is using justice as an instrument of terrorism.

Under the imperialist anti-terrorist laws, we have been given a total sentence of 333 years in prison without any proof.

We would like to give some examples of this game played under the name of trial:

– Our right to defence has been usurped.

– In order to prove our innocence, we were forbidden to present witnesses, with a maximum of 1 witness.

– Our witnesses were interrupted, not allowed to speak until the end.

– In the same way, we were interrupted and not allowed to defend our case saying that “the 18 months of pre-trial detention is over”.

– Our lawyers did not have enough time to prepare their defence and were constantly interrupted and prevented from defending our case.

– Neither the indictment nor the reasoned decision was given to us in our mother tongue.

– We were attacked and threatened by the police during our transfer from prison to court.

– The police assaulted and tortured us in the courtroom, with the approval of the judicial committee, in front of our lawyers and our loved ones who came to court.

– Sinan Oktay Özen, who was unconscious in the courtroom for 2 hours due to the torture, was not taken to the hospital.

– We wanted to identify the signs of torture on our bodies, but there was no forensic examination.

– We wanted to file a complaint against the police officers who tortured us, but the court rejected it. However, an investigation was later launched against us for “assaulting the police”.

– Our archive, computers, technical equipment for broadcasting TV programmes and the money we had on us were confiscated.

– Our computers and files, which we used for our activities on books, magazines, newspapers and television, were confiscated on the grounds that they were “evidence”.

– During our detention, the money deposited for our needs is being confiscated because we are being tried under anti-terrorism laws. The bank accounts of those close to us who deposited money have been frozen and investigations have been launched against them on the charge of ‘supporting terrorism’. This is a violation of the ‘presumption of innocence’. Because the decision against us has not yet been finalized.

We repeat again: We are Marxist-Leninist revolutionaries fighting against imperialism and fascism.

We do not accept to be tried under the anti-terrorist laws of imperialism and its collaborating fascist governments. The legal terrorism imposed on us must stop.

A fair trial is an acquired right. We want a fair trial.

In order to exercise this right, we are launching an INDEFINITE HUNGER STRIKE from 7 October 2022 with the following demands:

3- Our right to defend ourselves was usurped. We want our defense to be unimpeded.

4- We have been in custody since March 19, 2020. Detention is a measure. Extending detention turns from a measure into a punishment. We are political refugees. We have fixed addresses. We are not at risk of absconding. We want the trial to continue without detention.

5 – The police attacked and tortured us in the courtroom with the approval of the judicial committee. We demand that the judicial board and the torturing police officers who ordered the torture be punished.

6- Our money, computers and files were confiscated during detention. We demand the return of our confiscated property.

Our people, Greek people, and all the oppressed and exploited peoples of the world…

We will not submit to the legitimate terrorism of the Greek state collaborating with imperialism, the fascism of Turkey and imperialism!

Put an end to legal terrorism!

The anti-terrorist laws are an attack on the liberation struggles of the peoples.

We call on all the peoples of the world, especially the people in Greece, to put forward internationalist solidarity with our resistance.

CALL FOR RESISTANCE, CALL FOR VICTORY!

The 11 revolutionary prisoners in Greek prisons: