Letter by Anarchist Comrade Th. Chatziangelou: ‘Revolutionary Dignity or Death: There Is No Middle Ground Solution’ 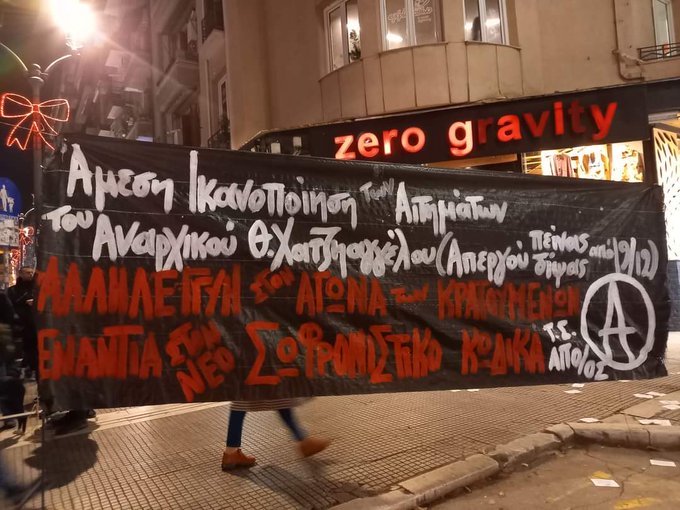 For almost two months now behind walls, there has been a mobilization against the new penal code taking place, which aims to turn prisons into a cemetery of the living dead and while the Ministry shows ice-cold indifference and underestimates our struggle, they announce new humiliating measures against us, such as the recent announcements made by Theodorikakos regarding the suspension of transfers and the presence of the accused ones in trials via teleconference.

During the last days before the fiesta that the President of the Republic is preparing in Korydallos, an invisible committee of power runs the prison, spreading bread and circuses. After the invasion by SWAT, OPKE (Special Police Teams for Crime Prevention and Suppression) and Drug Enforcement forces on the 17th of December and the terror show that followed without any findings, on the morning of December 19th, my abduction and vengeful transfer to Nigrita Prisons took place. All this happened on the exact same day that the cop killer of 16-year-old Kostas Frangoulis is released.

I have declared from the very first days of my capture that I will defend my proud captivity to the end against every dead freedom. Revolutionary tasks, commitments to struggle and enlistment in resistances are not lofty philosophical crowns but the depiction of a life dedicated to the struggle. Nothing less is worth as much as this. My transfer regards the position I have chosen to take in this mobilization and the fear they attempt to instill in anyone who resists this barbed wire asphyxiation. Both outside and inside the walls, I will always stand at the forefront of the struggle. The vanity of Tyranny wants to raise barriers to revolutionary tendencies. But nothing can bend us, nothing could end the passion for liberation.

Since 19/12, I am going on a hunger and thirst strike until they disclose the true reason behind my transfer and my immediate return to Korydallos prison.

Hail Themis, those about to die salute you

Resistance until the end, till we win

Sub-directorate of Transfer Courts of Thessaloniki

From: Act for Freedom Now!